Collaboration is increasingly being recognised as a powerful agent of productivity. We are told to have a laugh with coworkers and to help coworkers integrate into company culture to better retain staff. This is great because it's better for everyone: we get to have fun and the company gets more productive employees. 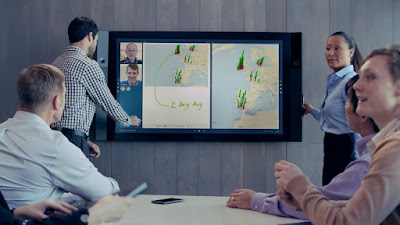 This week Microsoft announced the launch of the Surface Hub, a collaborative tool to increase productivity for business meetings. While we at nsquared have been going on about the benefits of collaboration since 2008 (in fact, our whole organisation is built on the power of collaboration), this announcement shows the power of multi-user technology is beginning to be recognised, and on such a huge scale too.

Microsoft is said to have billed it as a "large-screen collaboration device" which will automatically sync with OneNote, have an endless whiteboard for team brainstorming, as well as a number of large-screen apps. The device will be available in either a 55- or enormous 84-inch screen, and will be mounted vertically like a television. With Microsoft starting to take orders in just three weeks from 24 markets around the world, Microsoft's vision for the collaborative meeting space is truly at our doorsteps.

It is exciting to see steps forward in the collaborative sphere as the technology nsquared has been pioneering gets recognised as forerunners in this field. While a wall-mounted touch screen is great, there are of course limitations: Standing and arm fatigue means the meeting times would have a short life span. Only one or two people can interact with the screen at one time (in one physical location) means that annotating and brainstorming is limited to those at the front. nsquared technology specifically addresses these problems with our 360 degree immersive and inclusive DIGITABLE range. The DIGITABLE already has potential to share from tabletop to screen to create an immersive environment. Imagine the potential of the engaging conference capabilities of Microsoft Hub in combination with the collaborative interactivity of the DIGITABLE. 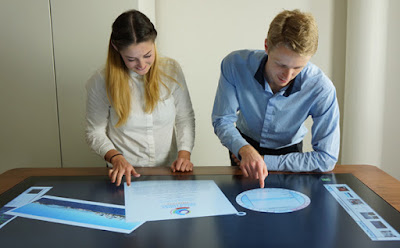 Users interact on an nsquared DIGITABLE

The future of meetings has arrived. While Microsoft may have taken a while to get here, we embrace new, intelligent technology that has real potential to improve peoples lives. If you would like to learn more about our collaborative DIGITABLES, or other intelligent business solutions, click on the respective links or follow us on Twitter, Facebook or LinkedIn. Have a collaborative week!
Posted by nsquared at 00:31